Myself and 7 other multidisciplinary Service Designers from various backgrounds (anthropology, process engineering, behavioural economics, and graphic design, to name a few).

This included, but was not limited to:

The feedback I received from the team and my direct managers was overwhelming positive, and I truly feel that I made a positive impact during my short four months at CIBC.

I’m particularly proud of the main project I worked on, as I played an integral part in the conceptualization, building and testing of the prototypes, and was one of the main actors in handing over our findings and insights to the team that was going to be building out the project.

While I can't name or show the products and services, I will talk about our process and some of the methods we used throughout the project journey of the main project I worked on throughout my internship.​ 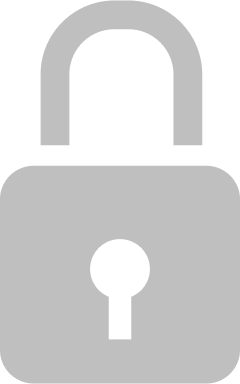 If we’re looking at the Double Diamond model, I joined the project team just after they finished the Discover phase and were going through the Define phase.

The team got me caught up on what they discovered, I hopped right into the Define phase with them.

For this project, the team consisted of 8 people: 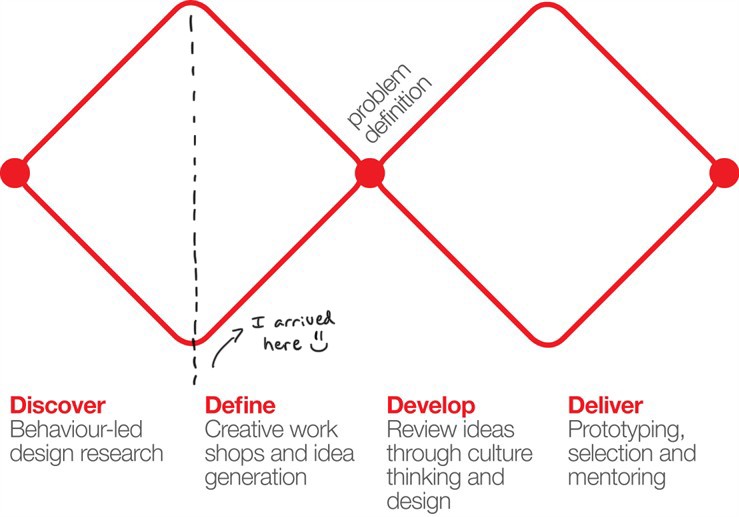 In my first two weeks, I was part of two co-creation workshops:

Since I had just joined the team and was just getting familiar with the project, my role was to take notes, observe, and help facilitate and ask questions as I got more comfortable.

We had multiple tables where internal stakeholders from different departments would choose random envelopes we had prepared with potential ideas in them. As facilitators, we would open the envelope, describe the solution to them, and discuss things like:

This tool was best for this situation as it allowed us to visualize all of the ideas in one place, and see which ideas the internal stakeholders thought would be least and most effective, and why.
‍
We took a few of the ideas that had the highest impact and lowest effort, and we brought them to the co-creation sessions with current and potential customers. 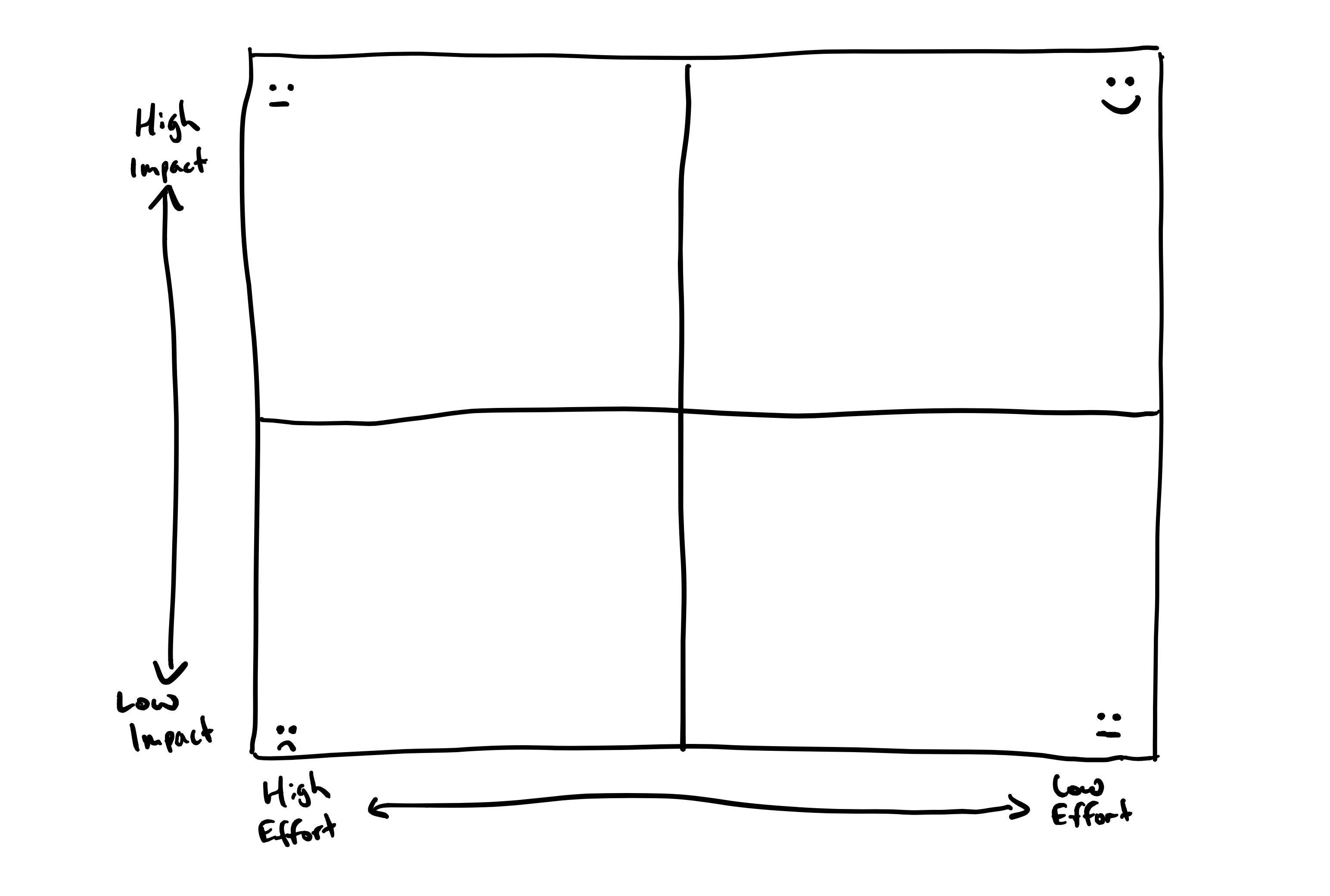 For this workshop, we recruited people that were either current or potential clients. We remained anonymous for the sake of clients remaining impartial.

Essentially, we created a board-game:

We found this would be the best way to get honest feedback from the clients. Rather than just asking them, we wanted to put them in a real-world situation as best as we could and see:

We ensured that internal stakeholders from CIBC were present to help takes notes and observe first-hand how the customers reacted throughout the process, and to receive their feedback after the session ended. 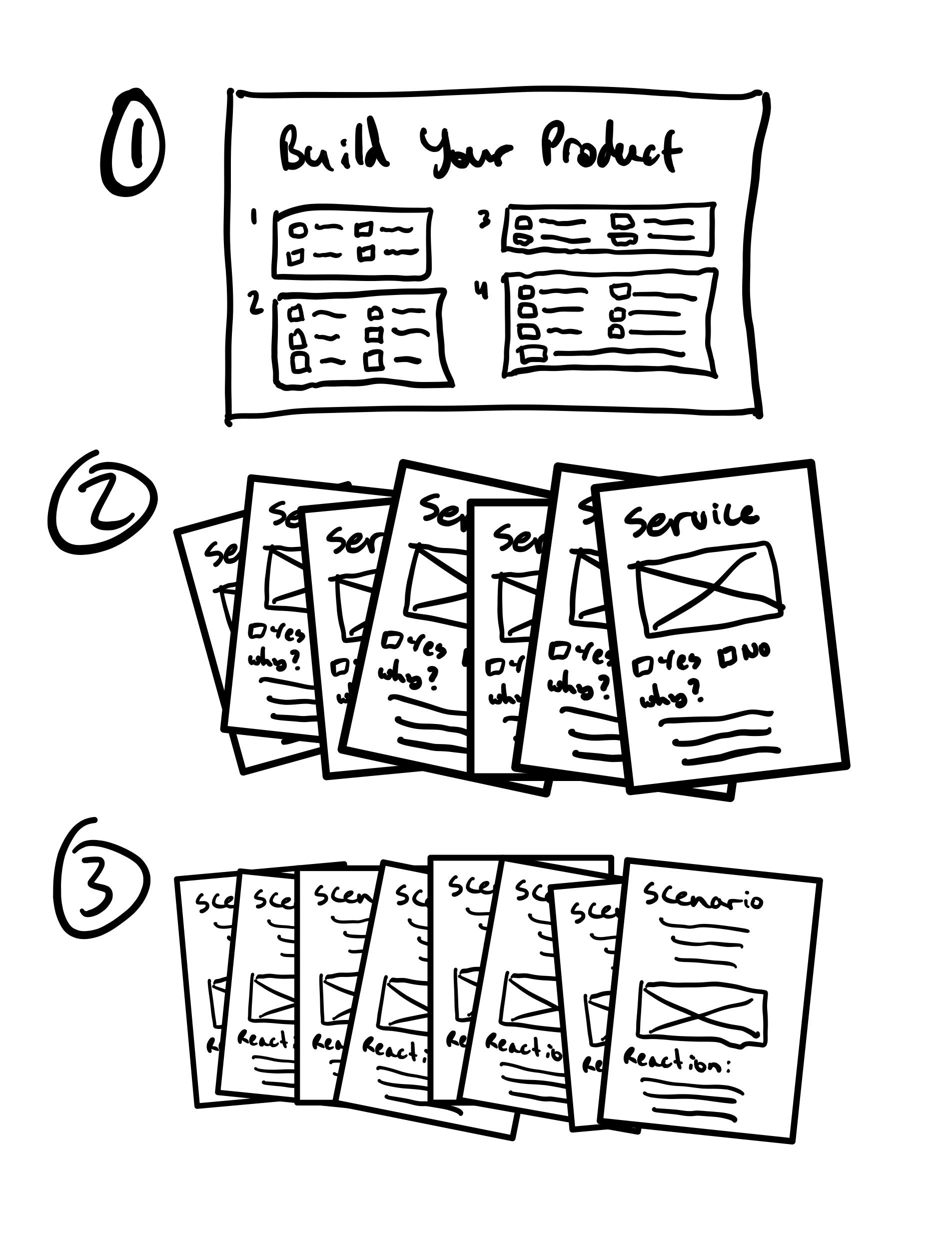 We took our notes from these sessions and synthesized all of the data as a team.

From there, we were able to narrow down 8 key opportunity areas that would help improve either the main product or the services involved, both on the front end and the back end.

Each of these opportunity areas would have taken too much investment to bring them all to fruition, so we needed to present our findings back to the product leaders and executives to let them decide which areas they’d like us to focus on and research further.

To do this, we actually created a gallery walkthrough. We printed each of the 8 key opportunity ideas out as a larger posters that included:

We gave each of the leaders and executives a clip-board and a sheet for each opportunity area that included:

Engagement. Rather than having a PowerPoint Presentation and hoping to keep all 8+ people in attendance interested, the gallery had each person actively engaging with and absorbing each opportunity area at their own pace, and each team member stood by to answer any questions they had.

This took the first half of the meeting, and the second half was reserved for a group discussion amongst the team and the leaders and executives where they advised us on where to go next. 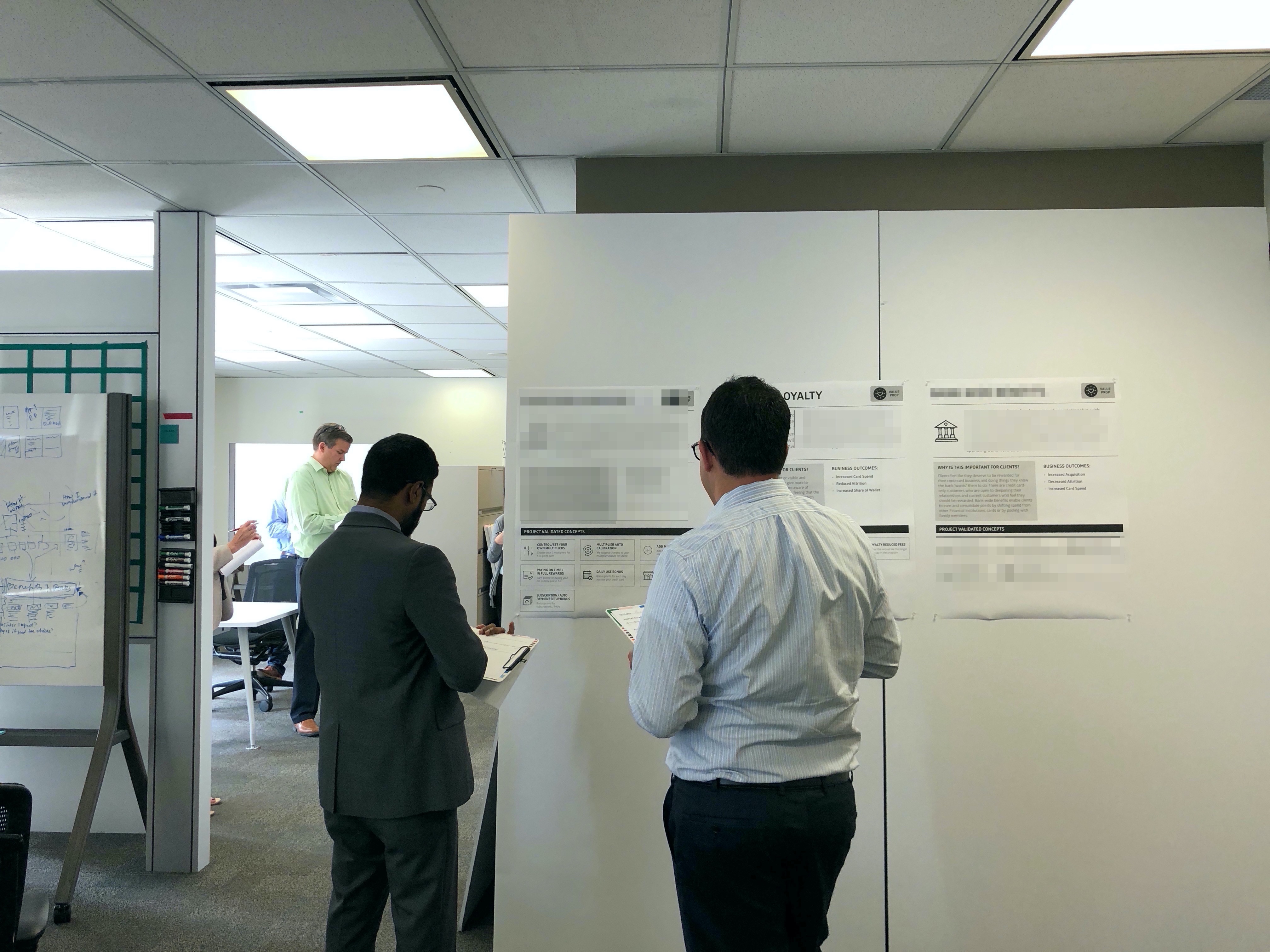 The product leaders and executives chose two opportunity areas that they felt would provide the most value and would be most feasible regarding budget and timeline.

To tackle both areas at once, our team of 8 divided and conquered – while four others worked on one area, myself and three others focused on an area that required a digital solution.

We started with competitive research. We looked at what the industry leaders were doing, and we took note of what we liked, what we didn’t, and what key components we could learn from and adopt to suit our solution.

I printed out screenshots of the competitors, and posted them to a foam board. As a team, we all added our own sticky notes and discussed what we thought.

Since we were four people working together, this was the most effective way to have everyone engaged and on the same page.

Next we began ideating, focusing on what they key ideas and features we wanted to include in our prototypes for testing.

We split up and each hand-drew what we envisioned the potential solution could look, then we combined them into one solution that we wanted take into user testing.

Since I had experience designing screens and building clickable prototypes, I was given ownership of putting together the medium-fidelity prototypes that we would take into testing.

We knew our solution would be a digital one, but we weren't sure if it would be solely through a website or if a mobile app would be required as well. Given a limited budget and resources to actually develop a potential solution, we thought we’d focus on the website for the first round of testing to see if the solution could be implemented solely through that channel.

This allowed us to test with the most amount of users possible in the shortest amount of time.

For those unfamiliar with the platform, we essentially created a test that shows users a screen and asks them to complete tasks, while asking them other questions while they do it. We upload our test to UserTesting.com, fill out the criteria for the demographics we want to test with, and then it’s sent out for people to go through and test. The users record their screens and audio while they do it, and the final video is uploaded for us to watch and go through.

It only took about 24 hours to get 10-12 completed tests, all done in the background while we focused on other work – much faster than we could have recruited and tested on our own. We did this for 3 rounds of testing.

We split up the duties of going through the recorded tests and highlighting key quotes from users (UserTesting.com is amazing for this by the way – their platform facilitates this process incredibly well).

From there, we came together to share our findings and synthesize the data, which we did by grouping quotes from the user testing together into common categories. I exported the quotes and notes from UserTesting.com, printed them, cut them up, and we all participated in sticking them in groups on the boards.

Again, being four people working on the same thing, this was the best way for us all to remain engaged and on the same page. 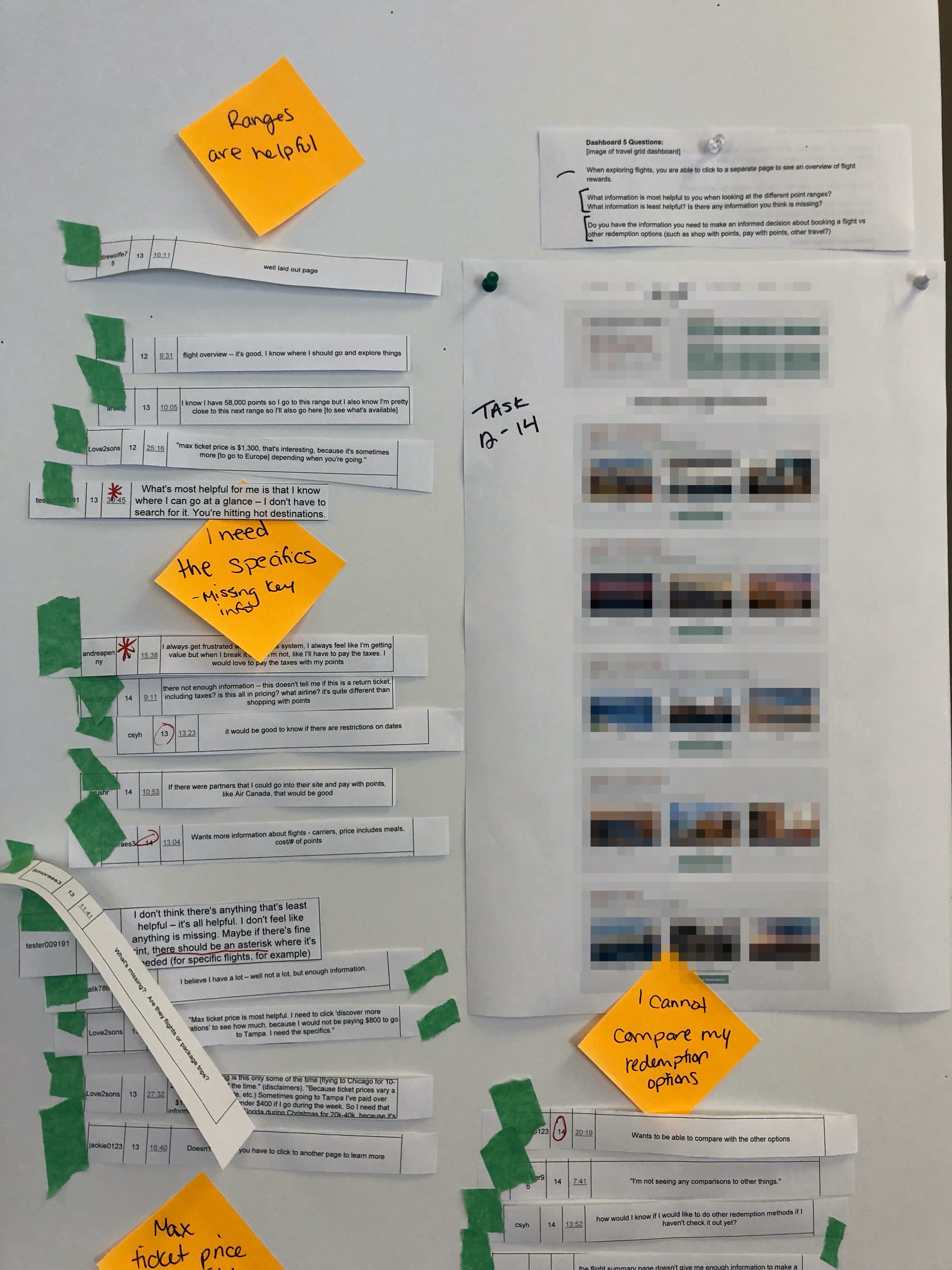 Turning our findings into artifacts that tell compelling stories

When it came to handing over our insights to the team that would be building out the digital version of our project, the team thought it would be a great opportunity for me to put my presenting skills to the test and lead the share-back, especially since I was the one in charge of building the designs.

For the share-back and handover, we started by presenting a slide deck that gave a brief overview of the project, followed by a focus on each of our 11 key insights that the final project needed to consider. For each insight, we included:

We finished the meeting with another gallery walk through so they could discuss ideas and ask questions.

Since the previous gallery walkthrough we did with leaders and executives resulted in lots of collaboration, involvement and feedback from everyone in attendance, we did the same to present back our findings from UserTesting.

They were thrilled with our findings, and were immediately looking forward to making the changes as they saw the potential of what they would bring not only to our clients, but the business as well.  They are currently working on building it out, and I’m looking forward to the day I get to see it go live!

View my other work